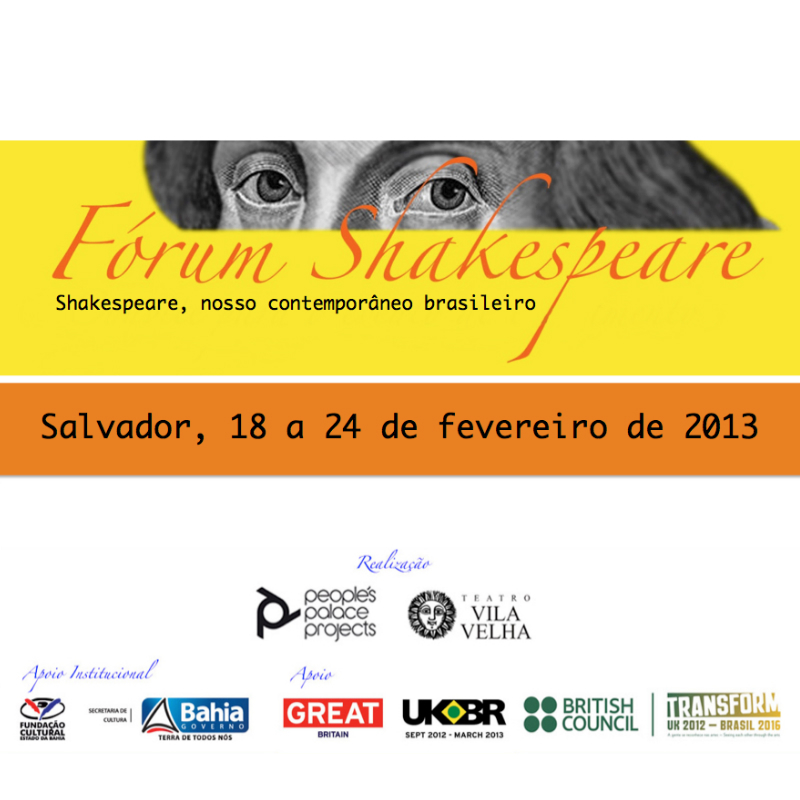 A partnership between People’s Palace Projects and Teatro Vila Velha brings the Shakespeare Forum to Bahia for the first time.

Shakespeare Forum is a multi-disciplinary artistic exchange that aims to explore, share, represent, rethink, transform and celebrate Shakespeare’s legacy. For the first time the Forum will take place in Salvador, Bahia, between the 18 and 24 February 2013.

Shakespeare Forum comprises of a week of activities involving artistic and educational workshops for emerging actors, directors, students and teachers from public and private schools. The workshops will be facilitated by artists from the Royal Shakespeare Company, one of the most prestigious British theatre companies in the world, as well as academics from Queen Mary, University of London. The Forum also include seminars, master classes and a round table on Shakespeare and theatre in Brazil open to the general public.

On the 1 December 2012, Paul Heritage revealed the full programme of activities planned and officially declared enrolment open. You can watch the launch event by clicking here.To take part, you need to enrol, which you can do by clicking here.

In 2011, PPP and the British Council welcomed the Forum Shakespeare in Rio de Janeiro to celebrate the 25th Anniversary of Nós do Morro. You can read more about it here.

Shakespeare Forum is supported by FUNCEB (State of Bahia Cultural Foundation) and is part of the British Council’s Transform programme.