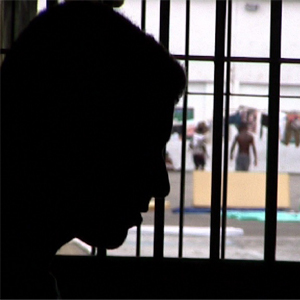 People’s Palace Projects followed its AIDS/HIV programme in Burkina Faso with a new project entitled Staging Human Rights, which began in the State of São Paulo in 2000, and went on to run in four distinct phases through to 2005 scaling up to a further 11 Brazilian states, reaching 20,000 prisoners and 1,000 prison guards over its six years.

Over the five years of the programme, People’s Palace Projects established a number of partnerships with arts organisations and public agencies, including the Ministry of Justice [Department of Prisons], Secretary of Prison Administration [São Paulo], the Latin American UN Agency for the Study of Crime and Delinquency (ILANUD), and Augusto Boal’s Centre for the Theatre of the Oppressed in Rio de Janeiro. The first phase of the programme included drama workshops, human rights dialogues, Public Forums, Regional Forums and a State-wide Legislative Theatre Forum, which took place in December 2001 at the Parliament of Latin America in São Paulo.

The success of the project led to funding from the Federal Ministry of Justice to extend the project in Staging Human Rights II and III into a further 11 states with a range of local partners, and as the project progressed, it was able to address the human rights issues faced by the guards as well as the prisoners, with an increased focus on joint performances at the public forums.  There was a special focus on working with female prisoners in the UK and Brazil, led by artists Lois Weaver, Peggy Shaw and Caoimhe McAvinchey.

The final element of Staging Human Rights was the creation of a radio play Carandiru with the BBC’s Writersroom, broadcast on Radio 3 in both 2002 and 2003, telling the story of a massacre of prisoners in São Paulo’s prison complex Carandiru.

People’s Palace Projects continued to promote conferences and seminars about the issues raised through the Staging Human Rights programme, with a 2002 high-level seminar in Rio de Janeiro for invited representatives from the prison services across six states in Brazil, with guest speakers from the UK and Brazil. In the North East of Brazil we produced a second conference with the British Council, entitled Changing the Scene II: Theatre Constructing Citizenship, bringing speakers from Kenya, Burkina Faso, the UK and Brazil.