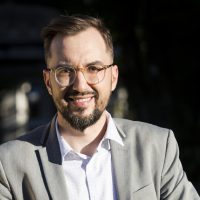 Leandro is an Economist, with a PhD in Development Economics and post-PhD in Creative Industries (Sorbonne-Paris 13). Visiting Chair in the Economy of Culture in the School of English and Drama, Queen Mary University of London from 2018-2020, he is an Associate at both People’s Palace Projects and Network – Queen Mary’s Research Centre for the Creative and Cultural Economy.  From September 2018 to September 2020, he holds a Newton Advanced Fellowship from the British Academy for his research project with PPP at Queen Mary, Counting Culture.

Leandro is an Advisory Board member at the UK’s national Policy and Evidence Centre for the Creative Industries (NESTA/AHRC), and also sits on the PEC’s International Board (convened by the British Council).  His collaboration with Paul Heritage and PPP began in 2016, and was developed through a series of creative economy research projects, including Relative Values and The Currency of Cultural Exchange.  Leandro is currently partnering with PPP on Counting Culture, Building the Barricades and Beyond Exchange,

Leandro’s permanent post is as Professor of Creative Industries and Economy of Culture at the Federal University of Rio Grande do Sul (Brazil).  He holds honorary and visiting posts at University Paris 13 (Labex/ICCA – Sorbonne – France) and University of Valencia (Spain). He has been an Advisor in Cultural and Creative Industries for Brazil’s Ministry of Culture, Argentina’s Ministry of Culture, UNESCO and OEI. He was the Creator of the Centre of Studies in Cultural and Creative Economy (NECCULT) at UFRGS, having led, in 4 years, 6 international agreements (Brazil-Europe); 20 large scale research projects; 7 international conferences; 12 books and the national large-scale project Brazilian Atlas of the Economy of Culture.  He is Principal or Co-investigator in international academic research funded by AHRC (UK), ESRC (UK), Global Challenges Research Fund (UK), Itaú Cultural, the French Ministry of Culture and Newton Fund (UK).  An international conference speaker and lecturer, he has presented in Argentina, Brazil, Colombia, Netherlands, France, Italy, Spain, Sweden and the UK.