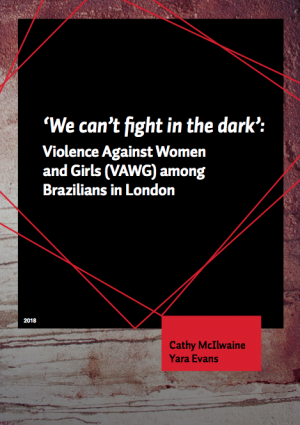 While research on the Latin American community in London and the UK is increasing as their visibility is growing (McIlwaine et al., 2011; McIlwaine and Bunge, 2016), many specific issues affecting particular groups within the wider community remain under-acknowledged and understudied. One of these is the incidence and nature of Violence Against Women and Girls (VAWG) among Latin American women migrants, and especially among Brazilians who comprise the largest of the nationality groups. Although the various organisations who provide services for Latin American women are aware of the high incidence, there is a need for robust empirical evidence on the nature of VAWG among this group.

This report addresses this need and outlines the main findings from a project on VAWG among Brazilians in London and among women in Rio de Janeiro funded by the Economic and Social Research Council. Focusing here on the London case, this project explores service provision based on interviews with 12 providers (see Evans and McIlwaine, 2017), as well as a survey with 175 women, together with 25 in-depth interviews and 6 focus group discussions.