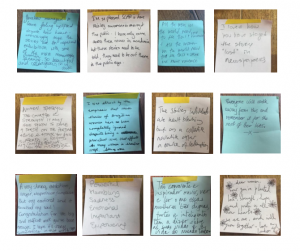 Click here to read full evaluation written by Chrissie Tiller about SCAR, an audiovisual installation bringing new perspectives to a subject that continues to define the situation of women in the 21st century: violence. Based on a research with over 800 women who live in Maré, Rio de Janeiro’s largest favela complex, Scar was created by Brazilian artist Bia Lessa.

Scar presented the stories of 20 women from Rio de Janeiro both as unique individuals and as part of a collective expression of resistance as part of the Women of the World Festival at Southbank Centre. The piece was produced as an artistic output of the transcontinental project Violence Against Women and Girls (VAWG).

About the VAWG project

The installation is produced by People’s Palace Projects and presented by Southbank Centre and Women of the World Festival as part of a research collaboration with King’s College London, Queen Mary University of London, Redes da Maré, Federal University of Rio de Janeiro (UFRJ), the Latin American Women’s Rights Service (LAWRS) and CASA Festival, with funding from the Economic and Social Research Council and the Newton Fund. The Newton Fund promotes the economic development and social welfare of partnering countries. For more information visit: www.newtonfund.ac.uk