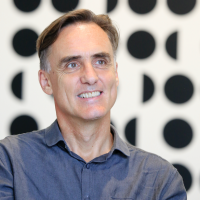 Paul Heritage is a Professor of Drama and Performance at Queen Mary; University of London; International Associate at the Young Vic; Associate Producer at Barbican; and International Adviser to the Brazilian Ministry of Culture on the Cultura Viva initiative. In 2004 he was made a Knight of the Order of Rio Branco by the Brazilian government.

Paul’s commitment to arts and human rights work and to community and participatory performance was nurtured in the LGBT equality movement of the 1980’s-90’s. For Gay Sweatshop, he directed Noel Greig’s and Richard Coles’ musical Paradise Now and Then at the Drill Hall in 1989, and while teaching Drama at Manchester University, he was Chair of It’s Queer Up North from its foundation in 1992 until 1996, and co-edited an eponymous 1996 catalogue of queer performance. A more detailed description of Paul’s roots in arts and activism can be found in this online extract from Caoimhé McAvinchey’s book Performance And Community (Bloomsbury, 2013).

Paul’s connection with Brazil began in 1991 with a British Council invitation to lecture on ‘Performance, Sexuality and Shakespeare’ alongside Cheek by Jowl’s tour of their legendary all-male As You Like It.

For over two decades, Paul created arts-based prison projects in Britain and Brazil, reaching tens of thousands of prisoners, guards, and their families with projects including award-winning HIV/AIDs education and Human Rights work. The work was based on Augusto Boal’s Forum Theatre practice, and a number of the Brazilian prison projects were delivered in collaboration with Boal himself and Centre for the Theatre of the Oppressed, Rio de Janeiro. In the early days of PPP (which began operating soon after Paul’s arrival at QMUL as a founding member of the Drama Department in 1996) he also delivered major projects in Burkina Faso and Azerbaijan.

In 2006 he set up the Favela to the World programme, a partnership between People’s Palace Projects, Grupo Cultural Afroreggae, and a range of UK partners. In collaboration with the Young Vic, he created Festa/Amazônia [2008]: a year-long performance project involving hundreds of participants and thousands of spectators in London and the Amazon region. From 2009-2012 he was funded by the Arts & Humanities Research Council for a three-year research investigation of the knowledge transfer between Brazilian favela-based artists and youth & community groups in the UK who use the arts to achieve individual and social change; and from 2010-2014 he worked with PPP Associate Artists Gary Stewart and Sylvan Baker on the Encounters Beyond Text: Art Transforming Lives installation project.

In 2010 he was a programming consultant for Southbank Centre on their Festival Brazil, and collaborated with Jude Kelly to create four seminars/lectures about aspects of Brazilian cultural and social policy; in 2012 he was Executive Producer of Rio Occupation London, a major project within the London 2012 Festival; in April 2013 he co-curated the Olympic and Paralympic Cultural Forum and Arte sem Limites, a festival celebrating UK disability arts from the Unlimited commissions programme, in Rio as part of British Council’s Transform programme. In 2014-15 he assisted Simon McBurney with research visits to make connections with Brazilian indigenous communities and artists including Takumã Kuikuro, as part of the development of Complicite’s acclaimed The Encounter.

Paul was the recipient of a Leverhulme Major Research Fellowship award from 2014-16, and has recently completed AHRC projects Relative Values,  a comparative evaluation of four local arts organisations whose work seeks to engage with their territory to produce social capital and positive social impacts;  The Currency of Cultural Exchange – a follow-on from The Art of Cultural Exchange, a 2 year research project under the AHRC Translating Cultures highlight and in partnership with British Council Brazil as part of Transform; Social Change through Creativity Phase 3, an AHRC-funded follow-on from 2015-16’s CreativeLab project; Dialogues on Public Security with Dr Eliana Sousa Silva (UFRJ), a British Academy funded Newton Advanced Fellowship; and with Prof Cathy McIlwaine (QMUL), Healthy, Secure and Gender Just Cities: Transnational perspectives on Violence against Women and Girls in Rio and London, funded by ESRC.

Practice-based research projects include Shakespeare Forum, which took place in Rio in 2011, in Salvador in 2013, toured four Brazilian cities in 2014, and in 2016 delivered three Portuguese-language productions by UK directors in three Brazilian cities; and Points of Contact, an inspirational Brazil-UK cultural exchange programme for mid-career artists, policymakers and funders inspired by Brazil’s Ponto de Cultura programme and which has most recently focused on exchanges around arts and homelessness (with Streetwise Opera), cultural skills training (with British Council Cultural Skills Unit) and disability arts (with Graeae Theatre Company and Crescer e Viver).

Paul’s current research is organised on four themes: Indigenous culture, including immersive-reality project The Challenge of the Xingu: indigenous cultures in the Museum of the Future; place-based research in Complexo da Maré, Rio de Janeiro, including Building the Barricades, an international cross-disciplinary collaborative research project that aims to build an understanding of mental health and substance abuse disorders in this fragile territory; cultural value, including Counting Culture, a two year research collaboration with British Academy Newton Advanced Fellow and Visiting Professor Dr. Leandro Valiati; and the arts as a social technology, which includes ongoing projects With 1 Voice, The Agency, Stages, and Shakespeare Forum among others.

You can watch a 10-minute lecture by Paul on the topic of popular culture in Brazil as a Utopian enterprise on the Stanford University channel, here.

Kate Tyndall’s book The Producers: Alchemists of the Impossible (Jerwood, Issuu digital edition 2014) includes a profile of Paul on pp 24-28. His list of academic publications is available from PPP on request.