According to the indigenous Kuikuro people in Brazil, artists are itseke, powerful spirits of invisible knowledge. The Kuikuro are a community of around 800 people who live in the upper reaches of the Xingu River, Amazon Region. The Xingu Indigenous Park is a protected territory of more than 2.6 million hectares and home to 16 indigenous peoples, including the Kuikuro. The area was designated as a protected national park in 1961 to protect the lives and culture of its indigenous villages and to preserve the local environment.

In April 2015, filmmaker Takumã Kuikuro travelled all the way from the Ipatse village in the Xingu Indigenous Territory to London to take up a challenge from People’s Palace Projects, as part of project The Art of Cultural Exchange: to spend 6 weeks in London directing a film that would capture his vision of the city as a “village”. Takumã was selected from dozens of applicants through a grant scheme called Culture Connection Brazil, promoted by Brazil’s Ministry of Culture with the support of British Council and the Transform Programme. He was commissioned to record London from an indigenous perspective, exploring similarities and differences between his Kuikuro culture and the Londoners he christened “the Hyper-Whites”. The result is the film London as a Village, a captivating and humorous anthropological documentary about western society and the many villages hidden under the skyscrapers of London.

During his residency in London, Takumã Kuikuro proposed PPP the idea of developing an artistic residency in the Kuikuro indigenous village, aiming to forge new connections between the Kuikuro and the cultural industries, both in Brazil and abroad. Professor Paul Heritage and Takumã decided to facilitate a pilot collaborative research project that foregrounds Kuikuro cultural practices, and the villages in which they are situated, as a site for training and exchange with non-indigenous artists in order to extend understanding of how cultural interaction, creative innovation and collaborative cultural production can be conceived and measured as essential to the wellbeing of the indigenous communities and individuals.

“As artists of the Kuikuro we document our material and immaterial culture to keep our traditions alive for future generations. It is our artists who share this knowledge with society. We welcome non-indigenous artists who are interested in learning about our history and who will bring their own ways of making art to collaborate with us.” – Takumã Kuikuro

PPP and AIKAX (IndigenousAssociation of the Kuikuro People in Xingu) hosted the 1st artistic residency in the Xingu in May 2017, as part of the research project Social Change Through Creativity and Culture. The two-week artistic residency saw Takumã Kuikuro collaborating with British digital technology artist Adam Lowe (director of Factum Foundation) and Jerry Brotton (scholar in cartographic history at Queen Mary, University of London). The aim of the programme was to build transformative dialogues through digital technologies that enable the Kuikuro people to create 3D maps of their territories and to explore new ways in which the indigenous peoples can bring the evolving experiences of first millennial life to contemporary debates about Brazilian economic and social development in the third millennium. Adam Lowe and a group of four artists and technology experts brought to the Kuikuro village cutting-edge technologies (including aa 3D Faro laser scanner) to allow Takumã to digitally record some aspects of Kuikuro’s at-risk cultural heritage such as images, sounds, graphics, artefacts and architecture. The outcomes of the artistic exchange in May were presented to the public during the seminar Creative Lab in Xingu: Art, Technology and Cultural Preservation, hosted by Museu do Amanhã.

“Bringing a team of artists as important as Factum’s to collaborate with the indigenous Kuikuro people is a statement of the importance of indigenous artistic production in contemporary culture. This is happening in a crucial moment, where society is questioning the role of this production in social and economic development. Art is a tool for resistance and sustainability for the years to come and a challenge as we enter the third millennium.“ – Professor Paul Heritage

3D scanning of the village of Ipatse, home to almost 500 Kuikuro people. Factum Foundation, May 2o17.

A 2nd artistic residency took place in Xingu in September 2017, as part of the research The Currency of Cultural Exchange: re-thinking models of indigenous development, undertaken in partnership with Neccult (Brazil’s leading research centre on the economy of culture). In the village of Ipatse, home to almost 500 people, the Kuikuro have constructed a traditional oca (indigenous house)as a residency centre for artists. Built with the same techniques that they have used for over 1000 years, the oca is a place for visiting artists to learn about their cultural practices and to forge new artistic collaborations. Nine artists from four cultural organisation across Rio de Janeiro (Festival Multiplicidade, Observatório de Favelas, Spectaculu and Agência de Redes para Juventude) spent 15 days with the Kuikuro indigenous people as part of the research investigating how we can measure the value of cultural exchange with Brazil’s indigenous cultures today. The residency also launched AirB2B, a new artistic exchange programme funded by the British Council. Conrad Murray, rapper and founding member of the BAC Beatbox Academy, was selected among 113 applications to join the residency in Xingu.

“Cultural exchange is about people from different communities working together to learn from each other and build mutual understanding. In a project like this, there is an extra layer of responsibility. We know that this sort of work is really effective for stimulating economic development, but we have to do that in a way that protects the culture, the land, and way-of-life that sustains the Xingu people.” – Professor Paul Heritage

Hekite Gele Ege. Conrad Murray, Sallu Kuikuro, Orlando Kuikuro, 2017.  Conrad and the Kuikuro artists created this song together, composing in English, Portuguese and Kuikuro, a Karib language with about 650 speakers.

The artistic outcomes of the collaborations were exhibited in October 2017 as part of Multiplicidade, Brazil’s leading art and technology festival. The Festival had an entire week dedicated to the cultural exchange with nine Kuikuro artists that travelled to Rio de Janeiro. The public had the opportunity to engage with various AV installations; Karib language lessons, traditional body painting, singing and dance workshops; screening of films by Takumã Kuikuro, talks with indigenous artists, activists and anthropologists, a workshop on digitisation of cultural heritage at risk; and a virtual reality experience developed during the residency in the Xingu. 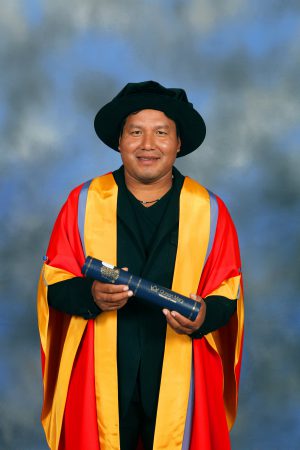 In recognition of the collaboration with researchers from QMUL, Takumã Kuikuro was awarded a Fellowship of Queen Mary in December 2017.

The artworks of the residencies in the Xingu were presented in London for the first time in May 2018 during the event Mapping the Kuikuro Community, part of Tate Exchange week ‘Producing Memory: maps, materials, belongings’. Around 2,000 people had the opportunity to enter an inflatable oca and see photographs and listen to ambisonic sound recordings of the community’s daily life and traditions, watch a video fly-through of scan data from around the Ipatse village, and take part in the Xingu Ensemble VR experience. The programme also included an interactive photogrammetry workshop with Factum Foundation and a special screening of London as a Village, followed by a discussion on indigenous experiments in cultural exchange. 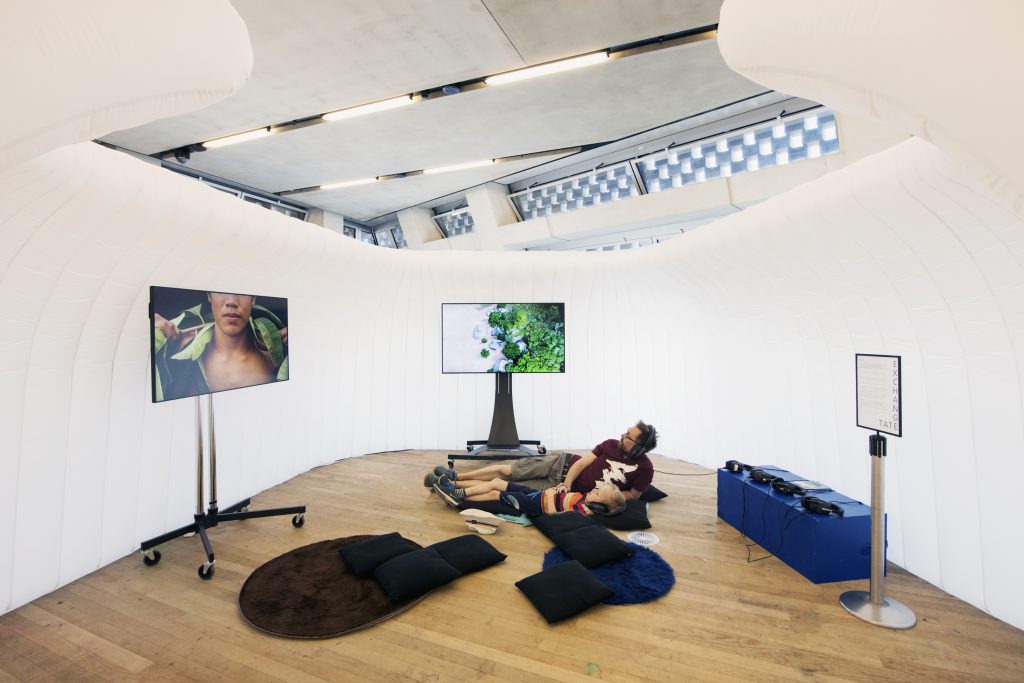 Click here to listen to The Voices of the Amazon, BBC World Service radio programme tracing a day in Takumã Kuikuro’s life in the Ipatse Village, home of the Kuikuro people in the Xingu region.

The Challenge of the Xingu: indigenous cultures in the museum of the future.

PPP is extending its relationship with AIKAX (Association of Indigenous Peoples of the Upper Xingu) and Associate Artist Takumã Kuikuro in an exciting new digital project in partnership with Factum Arte/Factum Foundation, The Horniman Museum and Gardens,  A Casa Gringo Cardia, Playground Entertainmentand WeSense.

It aims to combine the digital data capture associated with world-leading cultural conservation practice (such as photogrammetry and 3D scanning/printing) with motion-capture, VR/AR tools such as Oculus Rift headsets, and traditional Kuikuro objects and artefacts, to prototype an intense immersive experience for UK museum audiences of the day to day life, environment, myths and storytelling, dance, graphism, decorative painting, crafts and other cultural practices of an indigenous Brazilian village in the Upper Xingu region.  The immersive installation is being piloted/prototyped at the Horniman Museum in December 2018.

Join us on an electrifying journey into the very heart of Brazil, and spend a day at the Ipatse village, home of the Kuikuro indigenous people of the Xingu, in the Amazon region. Using exciting augmented reality and video technologies, you will meet face to face with the Kuikuro, a community of around 800 people who live in the upper reaches of the Xingu River. The Xingu is a protected area of more than 2.6 million hectares and home to 16 indigenous peoples, including the Kuikuro.

Come to see, hear and feel the stories they want to tell you about their everyday life, from the early hour when the first bird starts singing to the time the last star falls asleep. Enter the spectacular houses they build for their families to live in, join their daily activities of fishing and cooking, and discover the unique language that inspires their music and dances. And be prepared to be surprised: even in this remote village in the middle of the world’s largest tropical rainforest technology has arrived, and the Kuikuro are very connected with the outside world, either watching TV or on their phones.