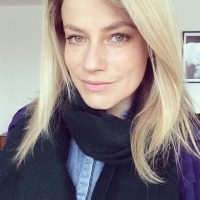 In January 2021, Renata Peppl moved to a new job in the QMUL Unit for Social and Community Psychiatry, where she now works on several arts and mental health/wellbeing projects that PPP delivers in partnership with the Unit.  In her extra time, Renata is still our project manager for several long-term projects at PPP: With One Voice – our arts and homelessness UK-Brazil exchange in collaboration with Streetwise Opera, from 2015 to date; and our work on Violence Against Women and Girls, including our partnership with WOW Rio. She is still contactable by email on renata.peppl(at)peoplespalace.org.uk.

Renata was born and raised in South Brazil and moved to London in 2011. She has worked as an arts journalist, playwright and arts project manager. Before joining People’s Palace Projects, Renata developed film, visual arts, theatre and music projects alongside organisations such as Somerset House, Roundhouse and RichMix. Previously in Brazil, she was co-founder and playwright for Tem inço na Coxia Theatre Company, having touring with her plays around Brazil for almost 10 years. She has also worked as a freelance culture journalist for publications including ELLE magazine, Folha de São Paulo and O Globo; and a PR professional working on accounts including Fundação Iberê Camargo (Arts Museum). For six years Renata managed a series of PPP’s projects including our London as a Village film project in 2015; The Verbatim Formula; and Building the Barricades.